I belong to an age where possessing a cycle was a sign of prosperity. Back then to be called really rich  - one had to posses a car; one of the two models, the aunty (Ambassador) or the kid (Premier padmini). Two wheelers were a rarity on the roads and then again most of them were either a 50cc affair or a bajaj scooter. Appa then bought a 50cc affair called the TVS50 XL model.
TVS is to South india what Bajaj was for the north of the Godavari river. Looking at the image today I wonder how the four of us fit on to it and zoomed around. Time flowed and appa bought me a bicycle - not your fancy multi-geared multi colored contraption. A simple device which took me from point A to point B. Through junior college and sometime after I was pedaling away or most times to save energy held onto locking chains hanging from the rear of any truck or turn goofy and hold a friend's hand who was riding pillion on a scooter. Race against smoke spewing buses (if you don't want the smoke in your face, you have to rush past) 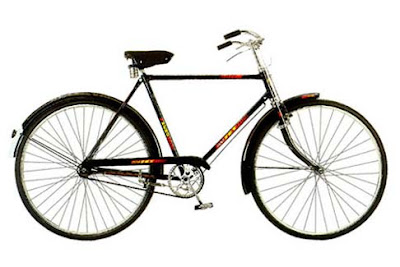 Children today would look at this and exclaim - "But this has nothing in it to provide an experience". I don't want to sound a reverse snob, but in our times we defined experience by our effort and not dictated by a contraption. Hummpppphhhh!!!. Signs of modernity I suppose. The mills of the gods grind at a very slow pace and appa procured through jugaad a Bajaj Scooter. Rahul Bajaj supposedly grinned at slow pace of production and arrogantly exclaimed that the people of India will wait for their scooter. I have been assured many times that this is an urban legend. You dear reader can decide what to believe. I care two toots of my bikes horn for the sordid details. 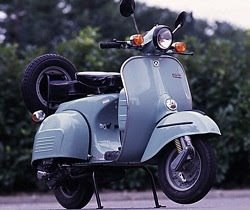 And don't even start asking about colors. Looked like Mr. Bajaj took his color lessons from Mr. Henry Ford. Back then nobody really cared about colors what with the dirty green buses operated by the state government or the black or white amby or padmini which  an occasional imaginative and resourceful person would get them painted in garish colors. Mind you we were still a two wheeler income family. A car was still out of our measly range. (Dear reader, don't start and tell me that most families are still so. Stop grudging my hard work and efforts to get out of that range).  But scooter compared better to a TVS 50 on the social scale. And a Bajaj chetak signaled that you have arrived. People would envy you as you zoomed;well actually trudged along the roads. Appa was never confident of driving fast and the roads ensured that you do not even think about speed. I coined my first gem at this time - the shortest distance between two pot holes is called a road. Around this time we did not even stop to think that there might be other two wheelers on the road, but mind you they were there. Not making a mark but still successfully transporting people - The Bajaj-M80 is the first zip drive(not your pants zip or storage devices) I can think of. Then there were others like  Enfield Mofa (I bet dear reader you are trying to figure the wheels) Hero majestic, Kinetic Luna, Silver plus and a lot more.

As you see not much of a choice among bikes even in dreams. The mills of the gods kept turning and in one stroke I saw something which altered my choices and hence even dreams. - MOTORCYCLES - another few years from now we will stop seeing the likes of such. Rajdoot, mini rajdoot, Jawa, yezdi (names which make me drool in anticipation) Just riding pillion on one of these was a cathartic effect. Once we went to Chennai to my uncle's place and I saw the real first love of my life - A jawa motorcycle - ooooooh! the  chrome, the thump of its engine and everything enthralled me. 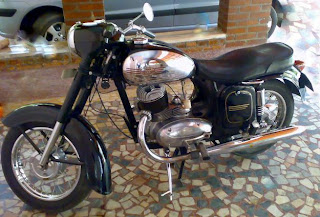 Now these beauties on the road were there long before I was as tall as them and so driving one was out of question. I moved into my teens and there were a couple of more brands on the roads and suddenly the roads were teeming with two wheelers. The age of transport-migration had begun. Leading the brand pack were there - Yamaha RX100, TVS Suzuki and Hero Honda CD100. We had television at home by now and a color tv at that-the brand is long lost and was called Binatone. On this invention we would see different ads and we were moved by the jingles and automatically we would choose our bikes by their jingle. I chose Yamaha! Well she had a nice tune to go with- "Listen to the heart beat of the YAMAHA". She was a beauty.

Time passed. I went into serious studies, preparing and flunking examinations while my sister found a job and with her new found income she bought a beauty (well she was red in color). The TVS Champ. One of my friends called it "basanti'. As luck would have it, sister quit her job soon after and went for further studies. I was still figuring out "what am I doing here in this world". And Basanti de-facto became mine.
us and we were spared further depredations (moralists stay of). my sister came back from her studies, took up a new job and bought yet another gem - the Kinetic K4. This remained loyal to me until a year ago when appa in my absence sold it of(Poor thing was rusting at home).
Ruefully I checked other options and found a bike more towards my liking and chaddi size. The Baja Pulsar DTSI. Now this mini-monster whom I christened Viru(make the link - Basanti-Dhanno) was my best bike till now.


I got married, am raising a son and in the midst of this I fulfilled my dream of buying one of the emperor's version. The Royal Enfield Classic 500. A dream come true. I raised my chaddi high enough to accumulate the necessary funds and procure my dream. 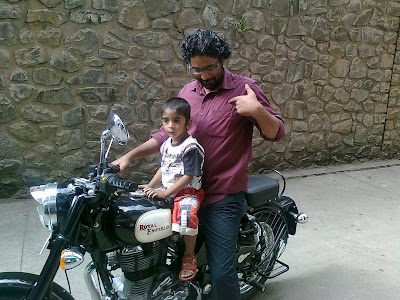 This is mine and I am saying it so. My son, Prataparudhra is now three years and he staked a claim the very next day I brought the emperor home.Why did he do so? well it was his birthday. Driving on the emperor is a veritable pleasure. The respect from the other road users is immense. Fewer honkings and no one trying to edge you off the road. I also get to see the envy of other road users and feel happy about it. 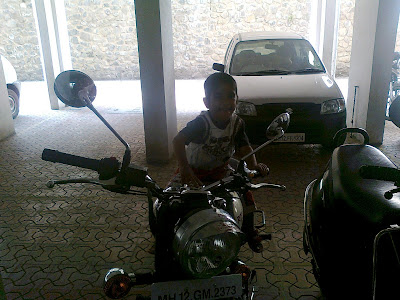 I can go on and on about the emperor whom I have named - Pinaka after the great bow of my god, the supergod Shiva. This might turn out to be the last two wheeler I ever buy. I am also running out of names for them. I bought a car after procrastinating for years. But there would not be a story for the car because a car is well a car. The bullet is a "statement".
Posted by Manikantan Naren at 5:30:00 PM